Los Angeles-based band Rose Dorn made a stop at the KUPS Studio in September to chat with General Manager Nayra Halaijan. Band members Scarlet, Joey, Jamie, and their friend Derec (OMW2HEAVEN) talk about all things involving music, LA, and every possible tour snack you could imagine.

How has tour been for you all so far?

Scarlet: It’s been good. We’ve only been like four days out. It’s been really beautiful. I’ve never been to Portland or Tacoma so that’s cool. A lot of beauty.  We took the 5 to Oakland and from Oakland we took the coast and it was a cool drive.

What has been your favorite place so far to play?

Joey: Arcata was really interesting. It’s in California near Humboldt and we played this joint liquor store- bar- sandwich shop.

Scarlet: That has been the most fun show but our favorite place so far has been Portland.  I mean we just got here (Tacoma) but I bet once we adventure this will be our favorite place. It’s just unknown! It looks really cozy and the air feels clean.

So you just released “Days You Were Leaving” on Bar None Records. How have things changed since that record for you guys? Since recording and releasing it?

Scarlet: I think a lot has changed. We recorded that two years ago and I think overall our lives have changed and maybe our music has changed. We have been playing around with the songs on that album up until the final cut of it, which was not much before the release of it. Jo: I would agree. We’re very perfectionistic so we just kept sending the producer notes up until the end. Ja: And I feel like we play a few select songs very differently. Our tastes change and our lives change. Jo: Definitely. A couple of the songs, I think the recordings on the record were like our third time playing them. S: We were there and we thought, “why not just try?” and it worked out super well.

How does your songwriting and recording go for you all? Is it usually collaborative?

S: Each of us writes a skeleton of a song like the basic structure and maybe some lyrics. Then we bring it to practice and we can all work on constructing it or deconstructing it or adding parts.  It’s really cool and special that we all get to have a part in it.  Especially in the album, but even in the EPs, they are all very collaborative and no one specific person takes over. Jo: Same with recording. There’s not one set person who does the guitar track or the bass track.  We feel out the song and it’s cool.  It’s constantly rotating who does what.

When I first saw Rose Dorn at the Teragram Ballroom in LA, you opened for Girlpool and I remember Joey came off of drums and played guitar.  Is that something that still happens?

Jo: Yea. We pretty much do that every show.

How did you feel about playing that show? 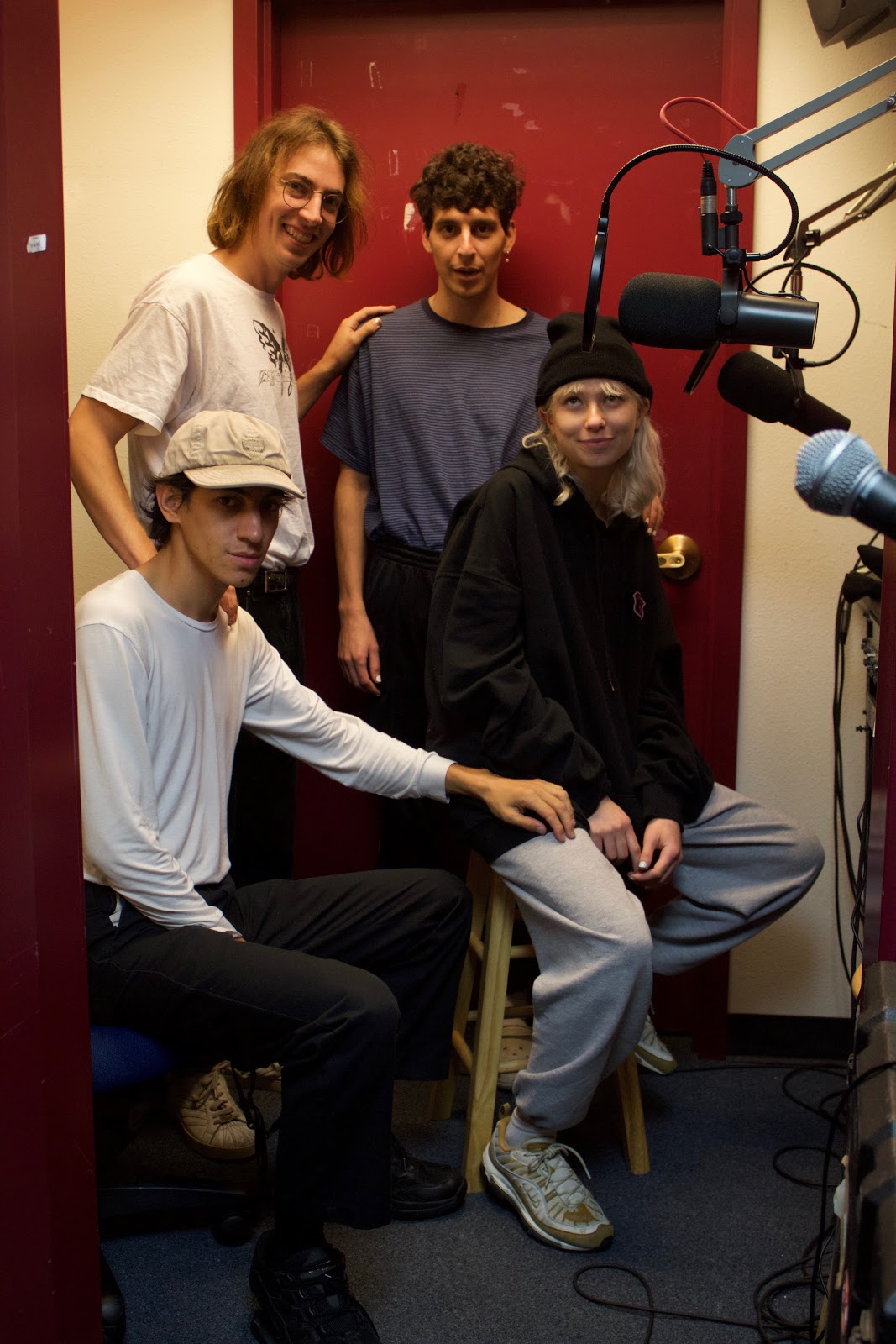 Jo: That was a blast. That was like our third show ever and it was a great lineup. We felt pretty small up there but people were so nice.  We played very carefully.

How does it feel to play in LA versus on tour?

Jo: Phew… interesting question. Ja: We’ve been really excited to not be playing in LA for a few days.  S: It’s fun to be completely unknown and completely strangers.  Everyone is pretentious in LA. Ja: We’re allowed to say that because we’re from LA.

How do you think growing up in LA has shaped your music, your sound, and who you are as people?

S: Joey and I were just talking about this yesterday actually. Growing up in LA and being a musician under any department is very lucky.  It has definitely helped and been super motivating to see other artists and other people doing their thing.  Something about it, and leaving town, it’s definitely a privilege to play in a band. Joey and Jamie and I just met and started playing in a band and it just worked out. Ja: We’ve never really started a band in any other city. Jo: It’s not really an LA thing (starting a band) but I think of songwriting as a very cinematic thing.

Have you been listening to any podcasts on the road? What keeps you entertained?

Jo: Besides the alphabet game? We love the alphabet game. D: We listen to a show about cops. S: It’s so interesting and it goes into specific stories and the backgrounds of them. We were talking about listening to a new one. Jo: This one called Case File. He wrote his number one episode about a crazy skydiving accident in the UK, but I’m not telling them anything.

Jo: Everyone should listen to it. It’s real wacky.

Have you been listening to any music on the road?

Ja: No. Nothing. *collective laughter*  S: We sing. I’m not even joking. 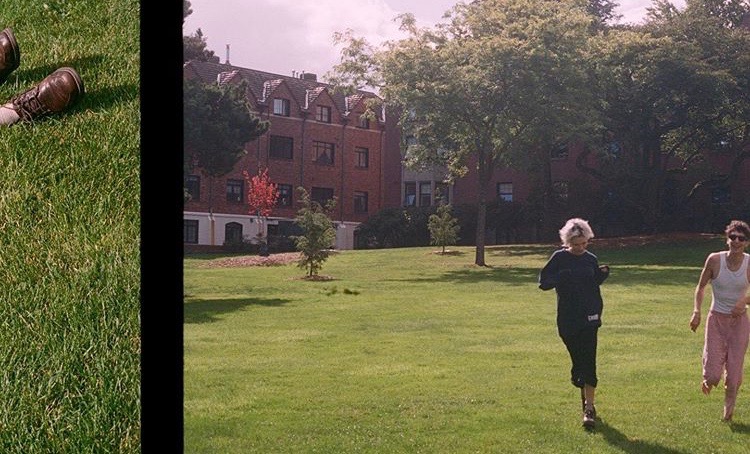 Do you have one song that’s been on repeat?

S: We just kind of sing over and over again. Jo: Barbershop quartet-ing it. We’ve been listening to Lana’s new album and Alex G’s new album. D: We’ve been listening to Neutral Milk and Mountain Goats. School House Rock, even. S: I was falling asleep and it was like… “three is a magic number” Ja: Oh! Zenzenzense by RADWIMPS. RADWIMPS are this amazing Japanese rock band and they did the soundtrack to this really amazing movie, “Your Name”.

That soundtrack is so pretty and twinkly. I hear a lot of slowcore and shoegaze-y influence in your music. Did you grow up listening to that or is that something that you recently came into?

S: I think it’s something we all grew up listening to. Kinda like Elliot Smith and the Verve for me. I think they all had some sort of impact somehow, without even realizing it. Jo: I don’t even know if that’s what we wanted to do.  Even when we were recording we were playing very carefully so every song had this slow intentionality to it. It wasn’t really a decided thing, it just showed up on it’s own.

D: These are the biggest snackers I know.  I eat meals, but they only eat snacks. It’s insane. S: Okay… Every type of Hubba bubba. I’m trying to get every flavor I see at gas stations. And Bubbalicious. They’ve been getting Subway a lot. Jo: Once…okay twice. S: That’s a lot. That’s enough to say a lot. J: Derec and I realized we’ve been getting the same sandwich. D: It’s the veggie pattie, which isn’t vegan PSA. We’re mostly vegan. Spinach, bell peppers, pickles, olives, pepperoncinis, white mustard, salt and pepper, toasted. I usually get a bag of Mrs. Vickies. S: I love Chex Mix. Even though I’ve only gotten it once this trip I’m waiting to get it again. Also Skinny Pop Popcorn. D: We’ve been noticing a lot of innovations in candy, that’s really exciting.  S: This is all we’ve been eating, we have another week and a half. No Taco Bell yet.

What do you do when you’re not making or playing music?

S: Joey and I make smoothies at the same place and I also work for a clothing company.  Ja: I’m a baker. I make cupcakes and cookies and assorted things like that. Jo: I work at a record and bookstore down the street from the juice shop. I do some writing here and there. D: I do lighting for fashion photo shoots.

Are you recording anything new anytime soon?

S: So we’ve been working on this album for about two years so we do have some new stuff we’ve done.  We haven’t talked about it in depth so far so we’re just going to finish up this tour and maybe hop on the next boat.