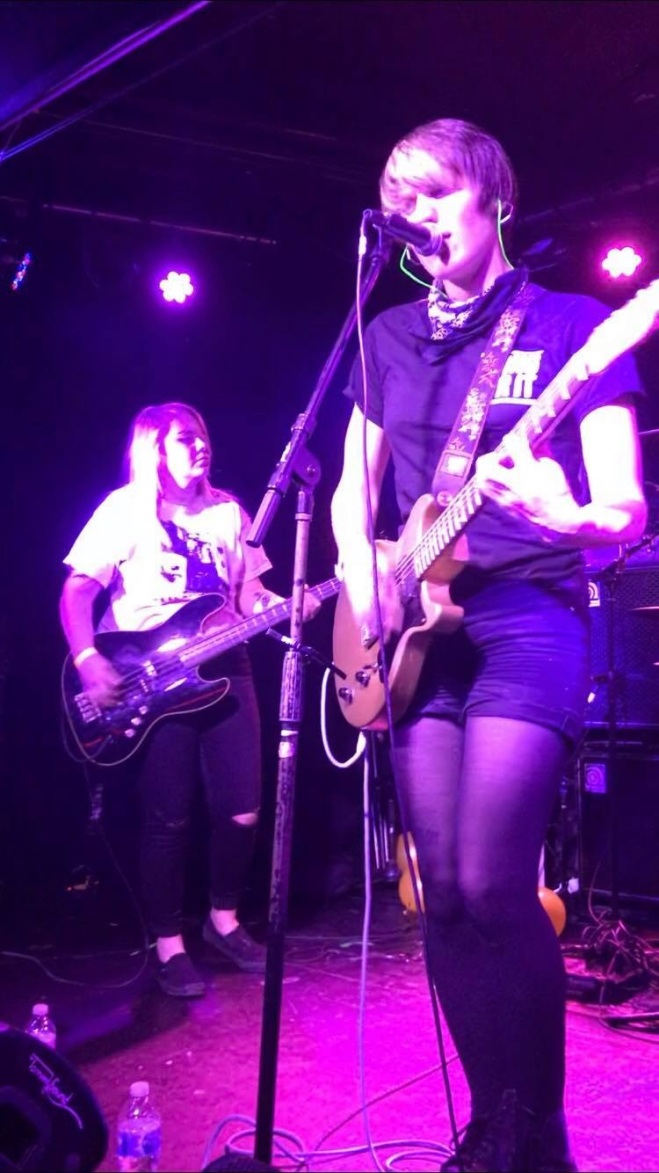 In 2018, San Jose emo band awakebutstillinbed (Tiny Engines) released their debut LP “what people call low self-esteem is really just seeing yourself the way that other people see you” to critical acclaim, and have been touring non-stop ever since. Before their show at Chop Suey with Alien Boy, Sunsleeper, and Sundressed back in February, I sat down with songwriter and guitarist Shannon Taylor to talk about tour planning, favorite San Jose bands, and a little bit about her writing process.

So, is this your first co-headlining tour?

Yeah, kind of–we did a DIY tour with Football, Etc. and people treated it like a co-headline when we did it, but I didn’t intend it to be. In my view that was more like a DIY tour package where it was two bands, and then I wanted to have local headliners and local openers, but no one did it that way. They all booked it like, local opener, local opener, awake, football, when what I wanted it to be was local opener, awake, football, and then local headliner, but no one did that because they all thought we were going to be big. That’s why that tour was weird.

Did that set up any strange expectations for this one – are you nervous?

Yeah, I am, this is our first co-headline and I didn’t really wanna do a co-headline.

Because I don’t feel like this band is at a point where that’s what we need to be doing, especially not co-headlining big venues like this. This room is really big, and there’s a decent crowd here– I’m really stoked about that, but I feel like the band should be playing smaller rooms, and focusing on supporting other bands, bands that are larger than us. Just playing to people who already like our band isn’t really doing anything for us, because we’re not big enough where that’s a thing. I feel like some bands do that because they’re really popular, a band like Joyce Manor headlining makes sense because they’re so popular they can just go on tour to support their record and their fans will come, and also it makes them money. It’s really different when you’re at that point and I definitely don’t think we’re there yet. I don’t like all the expectation to be the draw, it just doesn’t feel appropriate.

This past year, y’all blew up in terms of popularity. Did that set up any expectations you were uncomfortable with, especially on top of that huge DIY tour where people said you were going to die? Was that weird or scary for you?

Well I booked that tour, so I knew that tour was gonna be what it was–that tour was stupid. It was great, it was amazing, I’d always wanted to do a tour like that. There’s no possible way I could have realized how unnecessary that tour was until I did it, because in my brain that was the tour that I always wanted to do–because I wanted to see the country. And I did that, we played in almost every city you could think of. I was just talking to Tristan from Dogbreth about this, when I had the concept of doing a big tour like that, I had wanted to do a tour like that since when I was pretty young, and I had this idea that I would be in a band that absolutely nobody knew, so every single show you played, nobody would be there to see you so you would have to play and impress them. That’s always what I imagined would happen. Well that wasn’t really what happened with awake, because awake was already at a point where we were driving people, not gigantic crowds but every single show we played we brought out 5-10 people at least. So we ended up just doing an oversaturation tour, and I didn’t really realize that would be a problem for bands like us, but it is.

This is our 4th Seattle show, and we did our first tour in January last year. That’s crazy, no one needs to play Seattle four times in a year. Two times in a year would have been “Oh, you guys are touring a lot,” so we definitely overdid it. It was sort of aimless, at that point you’re touring just to tour. If you’re a band that has nothing going for it, that’s how you do it. There are bands I know that dont have any press, and that sucks that it’s like that, that it’s hard to get attention, but I was prepared for that. When we did our big tour that’s what I kind of thought it was going to be like but then it totally wasn’t.

We played Lowell, Boston, Providence, and also Northampton, we didn’t have to do that–we could have just done Boston and all the same people would have come. That’s the other thing, what I didn’t realize, is that people will drive to your show. When we played in Providence and we played in Lowell, if we had just played in Boston, people from both those cities would have just come to the show in Boston. If they didn’t, it’s fine, we’ll come back later. I think I had this idea that I was never going to be able to tour again, I kind of saw it like “this was my shot, this was my chance.”

It’s funny though because that tour there were already shows with people trying to get us to headline or booking us at big venues. Our second full US tour was like Mexico, Canada, with some USA sprinkled in, and the first time we ever played Toronto the promoter booked us at this large venue called the Baby G. Now the Baby G isn’t a huge venue, it’s maybe 250 capacity which is small in the grand scheme of things, but for a band like us it’s really big. And he booked us there, and we had an amazing show, we played to a really enthusiastic crowd, but there were probably 45-50 people there. And he was like “Sorry there’s not more people”, and I was like “Dude that’s a lot of people, I was just freaked out that the venue was so big”, and he was like “Sorry I thought you guys would fill up the venue”, and I was like, why, why would you think that, this is our first time playing Toronto and our record came out, at that point, 7 months ago, our first release ever; it’s just bizarre that people would think we had that pull. Whenever people think we’re more popular than we are, it freaks me out so much.

Looking back, can you think of any bands that you saw when you were just getting into your local scene that inspired you to make music or make music differently?

Yeah, I got into the San Jose scene through my first band, and all of those people, at our first practice, they were like “We gotta give you an initiation into what San Jose DIY is”, they played me Hard Girls, Shinobu, and Leer, at that point they had only put out their first EP, before they put out their LP and became a big band, and also Pteradon, The Albert Square, and a bunch of other San Jose bands. All those bands were the foundation for me getting into DIY punk and stuff, obviously I got into stuff that comes from DIY before that, like Cap’n Jazz and stuff, but then I met these people and got into the local scene.

So you’re writing a new record, can you tell us what that process is like? self-esteem was written over a long period of time, so is it a completely different process for you writing this new one?

Sort of, the songs are all coming out along the same pathway, the way I write songs they just come out. I never sit down trying to write, they just sort of come out of me. It does feel really different from self-esteem, because that record started out as me wanting to do a solo thing, because all the other times I’d ever done music, they were always with other people who were helping me write the songs. I had fronted or at least partially fronted, the other bands I was in, like in Jr. Adelberg I sang lead, at least for the first ep, but then we switched off for the others. So self-esteem was a conscious decision to do a solo thing, so it was harder to get in the groove so it took a lot longer to start because I was scared to write my own songs, because I didn’t think anyone was gonna like them. I almost didn’t know how to do it. I had written songs before but it was scary to do it myself and I had this really high bar, I still have the same bar but I’m so much more practiced since I’ve written those nine songs. I’m so much more confident now that the other songs are just so refined that I’m less worried about them being good. I’m still worried about them being good, but not to the point that I’m not writing anymore. Before I was so worried about them being bad that I just wasn’t writing them.

Last question, do you have anything that you like to do before you play a show? Do you have any pre-show traditions or warm-ups?

I definitely do, before I found you for this I was doing my vocal warm ups that I do everyday of tour. I guess you might call them intense–I have to do 15 minutes of breathing exercises, 30 minutes of scales, and then I do about 15 minutes of vocalizing, so that I’m actually singing the parts. My voice gets rusty, it’s hard to to sing these parts every night and not lose my voice, and I think I do a decent job. Especially because I’m playing bass in Sunsleeper on this tour, and there’s a song where they have female vocals doing harmony, and so they asked me to sing that and do back-ups for other parts, which is fun but it’s a lot of singing when I still have to do my set too. So that’s the hard part of this.

awakebutstillinbed embarks on yet another US tour next month supporting Worriers and joined by Pity Party. Check the dates below and check out their Facebook page for more information.

One thought on “awakebutstillinbed Interview (2018)”