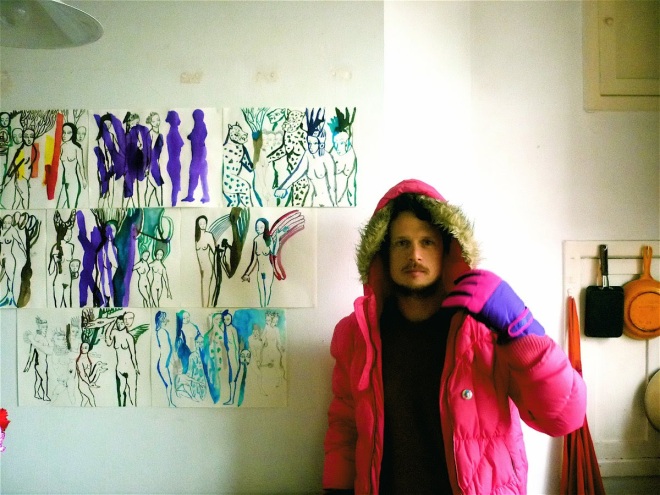 After a decade of silence, Olympia and K Records heroes Old Time Relijun have re-emerged and re-formed to respond to and confront our current socio-political mess with an enthusiastic and timely new record, See Now and Know, as well as an upcoming American tour.

Visual artist, This Saxophone Kills Fascists founder, and Old Time Relijun’s bandleader, Arrington de Dionyso was gracious enough to respond to a few questions regarding the necessary return of the band, the magical properties of the musical art form, and the process behind the group’s new record before the group hits the road in April.

KUPS: See Now and Know serves as the group’s return from a decade-long hiatus, why is OTR deciding to return now?

De Dionyso: Old Time Relijun isn’t just a band, we’re all part of a bigger plan and we each have our parts to play as the world turns and our stories twist and intentions merge. Right now the world needs Old Time Relijun more than ever before, so we just had to answer the call and try to do whatever we can to help out. I come from an age of optimistic idealism — we used to believe that music could help change the world. Facing such enormous evils as we are now with the encroachment of fascism upon our political landscape along with its handmaidens of racism and ecological exploitation, I know it seems like it could be a ridiculous proposition to try putting forward the idea that music can have any effect at all. However, I can state very clearly what I know from experience: music is a force for HEALING, and even more than physical healing, it can be used to provoke the healing of damaged imagination. As daunting as it seems, if we can use the music of Old Time Relijun and others to heal the damage that has been done to our collective imagination, we can easily, in turn, bring our medicine to the entire world.

KUPS: What has each member of the band been doing during the hiatus, how have those pursuits outside of OTR influenced or changed this most current incarnation of the band?

De Dionyso: The band never “broke up” the way that bands sometimes do. We simply found ourselves in circumstances that forced us each to focus on other things — we were all living in different cities, occupied with sustaining families and careers in the global economy. For much of the intervening decade, I have been engaged in a form of “alternative diplomacy,” by fostering relationships between far-flung communities dedicated to the diffusion of experimental music and the decolonization of traditional musical expression throughout Indonesia, Japan, North Africa, and South America. After being attacked for my artistic expression by a baseless right-wing conspiracy theory, I also founded a group called This Saxophone Kills Fascists, which channels the spiritual power of post-Ayler saxophone medicine to dismantle white supremacist power structures through sonic vibration. Interestingly enough, the official saxophonist of Old Time Relijun, Benjamin Hartman, has used his own knowledge and experience of the saxophone to build a new career as an electrician. They don’t seem to be related at first glance, but they’re actually very similar!

KUPS: See Now and Know is a concise, bouncy, and furious record, and I’m curious to know if the process of writing and recording the album reflects the type of spontaneous spark of inspiration and energy the music seems to display?

De Dionyso: Thank you! I’m really glad that comes through. Things came together for this record quite rapidly, and in a certain sense, it felt like the songs kind of wrote themselves. Embedded within each song is a kind of magic spell — when I write songs I am much more interested in finding ways to translate that exact spark of inspired energy that happens in a  moment of creative impulse when you listen to the voice of imagination. My work has little to do with capitalistic notions of “personal expression” and everything to do with translating the unspeakable into music that people can move to.

KUPS: How long have these songs been around for? Has everything for this reunion of sorts been created with the reunion in mind?

De Dionyso: The songs just happened on their own, like a magic gush of water springing forth from a rock. But, for creating the conditions that allowed that magic to happen, all the credit is really due to the hard work and diligence of our bassist Aaron Hartman. He produced the album in his home studio and it was his intense focus that allowed us to move forward as a band with a unified vision, not only in creating this record but in our continued existence as a touring entity as well.

KUPS: The band is heading out on its first major US tour in a decade starting in April. what are you most excited about to be touring as a group again?

De Dionyso: A lot has changed in the music world since we last toured as a band. Far too many people are getting most their music from tiny earbuds connected to a telephone and this to me is an obscenity to be abolished. Old Time Relijun’s music thrives when it can inhabit a space — when sound waves bounce along walls and move through dancing bodies — that is how the medicine takes hold. It’s crazy to think of people listening only with their ears — I think that what you hear with your ears is only maybe 10% or less of the overall potential cathartic impact of an Old Time Relijun experience. So in that respect, we owe it to our audience to put a little dragon juice in the van and bring it to the people that need it the most.

KUPS: What has it been like practicing as a band for live shows again, and how has it been constructing a setlist with the new material?

De Dionyso: It’s been fine. We’re all just family at this point so band practice is just like a family reunion anyways. The setlist is constructed in a way so that the newer songs are highlighted in the midst of all the classic “fan favorite” tried and true Old Time Relijun “hits” that people know and love and tend to sing along with when we play live. The new album’s been getting a great response and so I hope folks will sing along with the new tunes too!

KUPS: I know you’re concentrated on the immediate future first, but can we expect another long silence from OTR after this album cycle is over or is this a start to a new long run of OTR releases and tours?

De Dionyso: Oh, I anticipate we’re going to be pretty damn busy for a while here. I’m looking forward to playing “I Know I’m Alive” on Colbert.

You can listen and download “See Now and Know” right now at oldtimerelijun.bandcamp.com. Make sure to catch them live on their long-awaited, upcoming “Dragon Juice Tour,” dates below.